How to See Auras
Seeing auras is one the most popular questions I get from fellow lightworkers. Seeing is one thing, reading them and translating them into doing the charitable work of the universe is another.
First, let's start with seeing them. All humans have the ability to see auras, so it's far from a special, or unique gift. If you think about it, we would have to be able to see them to do have the opportunity to use them. However, very few humans have the skill, and this is because of one reason. Seeing auras is a power, and like all spiritual powers, they are not handed out like candy.
Think of a bodybuilder. We all have the same muscles a bodybuilder has, but the bodybuilder makes a commitment to learning and develop their skills. Having the ability to see auras is the same thing. Any spiritual power, including auras, come with some basic rules. I quote the movie Spiderman when I say: "With special powers comes special responsibilities."
Auras are almost always represented emotions. However, they are not always pertaining to the immediate time you are experiencing. This can also change their meaning.
Given these basics, let's start with an example you can develop to see auras. Anger is the most intense emotion. The next time you are in a situation where you are in direct contact with someone angry, try to connect the expressions on their face with the primary color you will see in the vicinity of their heart.
1

How to See Auras

Free Spiritual Guidance
by Jordan Canon, Spiritual Advisor
The colors you will see have unique meaning to you. Red and its shades have a meaning to me. However, it is highly unlikely it will have the same meaning to you. Like the bodybuilder, you have to develop your by trial and error what red, and its flow means. You are making a unique connection to the universe, and it is working with you to help you develop this skill. Be patient (which is a virtue by the way) and do not evaluate or judge your progress. There is no evaluation, score, or rank when it comes to seeing auras.
Why Do You Want To See Auras?
I started with the "how," but to achieve this skill, you have to first understand the power of "why."
Why do you want to see auras? Attaining spiritual power is not anything I wish on anyone. If you think it may be cool to do, or curious of metaphysical abilities in general, you won't be able to develop spiritual skills. Here are the rules to follow:
Types of Auras
Auras are misunderstood in that people think that colors translate to a message. This is true, to some extent, but the ability to see and read auras extends to all the senses. Seeing visions of pasts and futures, hearing people think like they are talking, and empathically feeling emotions of another soul are all examples of skills (and there are many more) that start with seeing and reading auras. It also opens a portal to communication with other souls not physically living as you are.
Imagine you're the only cab driver in a town. Wouldn't everyone always be wanting you to take them somewhere? If you want to learn the skill of driving, and to do so, you have to drive for the charitable benefits of others; you can expect to have a lot of opportunities to implement your skill, whether you want them or not. You can't stop the calls from coming.
More often than not, the auras you might see are not coming from the person you are looking at. They are coming from the source of the communication trying to get a message to you for a task that has to be completed.
If we go back to the person you may be watching who is in a fit a rage; the colors could be an attempt to communicate with you that this person has an issue that needs to be healed. This could be in the form of spiritual healing, related to a traumatic emotional event, or a physical healing, like the person as on an early path for a heart attack.
Personally, I do not attempt to figure out where the messages are coming from. It adds a whole different level of power usage. I simply refer to it as the "source," which can mean anything or anybody. However, an angelic source, rare as they are, come without any doubt and are quite an experience.
Spiritual power is not easily processed by the human body. Expect very short exchanges, in the beginning, followed by the feeling of being "drained" so much that you have to sleep. The universe will recharge your body during this sleep; that will get you back to where you were, plus the tiniest gain. Exactly how a bodybuilder increases muscle mass. You cannot maintain any spiritual power connection longer than your body can process it, which is why you can't see auras at your will.
And even if you could, you'd be using the power for yourself and not others. Again, it's a temptation every Lightworker experiences and is impossible not to accept one. Power comes in one form: Power. How you use it determines your evolution. It's also quite amazing what you can do with these abilities for yourself, which I won't share, but as I said, you can't advance in ability, and every action, especially when it comes to temptation, comes with a powerful and less enjoyable, reaction.
In all honesty, I hope this deters your desires to see and read auras rather than increase them. It is a one-way path and lifetime commitment that never goes away. You could easily create your own hell more than you can do the charitable work of the universe.
But the world needs Lightworkers, and this is the only reason I'm writing on the subject. 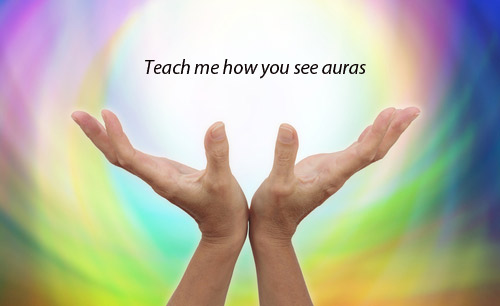 When you see your first auras, they will be at the lowest intensity. Forget about traditional teachings, such as chakras; because there is no "textbook" way to learn how to use this power. It is unique for each of us. What I mean by that is that colors in auras do not have specific meanings. Anything you might read elsewhere is too vague. The is an unlimited number of shades for any color, which greatly changes their meaning.
The color itself means nothing without seeing the flow. No aura will remain constant; they are always moving and blending with other colors. It is the intensity and volume of the colors blending; you have to learn how to translate into spiritual communication from the universe. Think of a pool of clear water with different colors of ink dropped into it. As the ink blends with the water flow, it changes color and intensity. This is what you are looking for to be able to start seeing auras. 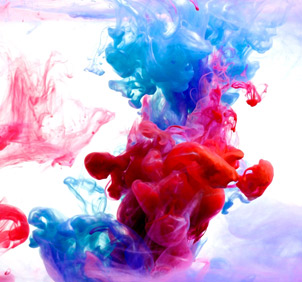 The catch here is that you cannot be angry to see this aura. You have to be Zen, meaning calm and relaxed. Zen is the only way to open your soul to the energy and power of the universe. Temptation, which I define as an energy that only wants to take you from the light, will do everything in its power to have you engage emotionally when you are reading auras. You must also be very familiar with the basic temptations as anger isn't the only one it will use. More on this later.