Pisces are easygoing; both will have no problems communicating well with each other. They are extremely sensitive, sensible, and passionate. The energy and commitment they can invest together are always at par, not too loose and never too tight. They have so many similarities that it can also bring clashes, destruction, and mishaps.
Copyright 2008 Free Spiritual Guidance.com   Art Licensed by Shutterstock
This Page Was Last Updated On: 10/7/2021
1

Having two Pisces come together and form a relationship is probably the best love match there is. Pisces are known introverts and sometimes misunderstood. Who would know and understand their unpredictable side better than a fellow Pisces?
Both share the same insights, dreams, and characteristics. They are kind-hearted, optimistic, and open to new challenges and opportunities. They are both compassionate, and have similar needs and affection. 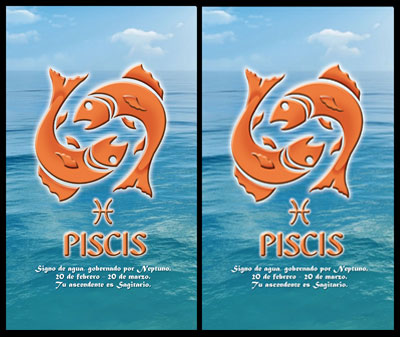 Having a relationship with a fellow Pisces can bring the best and worst in each other. They are lazy, complacent, compulsive, uncontrollable, and always fancy about everything. The kind of relationship they both share is more on the best friend level. They both share flexibility and understanding, making them incredible friends, much more-so than as lovers. Your Daily Pisces Love Horoscope will point out these traits.
Likewise, Pisces are extremely romantic. They are expressive and want the same level of appreciation and showiness from their partners. They need to feel secure and emotionally free. And when issues arise, it is important that both understand how they can elude themselves from conflicts and only face them when things have cooled down. It may be impractical, but that is just how Pisces works things out.
Lastly, having a relationship with a fellow Pisces can give personal and emotional satisfaction. Because they share the same interests and dislikes, they practically understand how to stimulate and encourage each other. They can think alike and sometimes have the same views and opinions on things. There are few clashes, one thing that Pisces rarely has with other zodiac signs.
The problem with Pisces is that they have so many plans and ambitions in life, but more often than not, they fail to materialize them. They lack focus and discipline. And though they can be sensitive to the needs of their partners, they both can lack the same interest to encourage one another to push themselves their limits and reach the things they want to achieve.
Those born under the sign of Pisces are extremely secretive even to the closest people around them. They would rather keep things to themselves and omit others from their personal problems and issues. Pisces rarely asks for help from others. It is not like they are arrogant; they simply do not like to put others in the same boat they are in.
Finally, you will learn in your Daily Pisces Horoscopes that Pisces being gullible and weak-willed can pose a threat to the relationship. They can be indecisive and compulsive, and on major decisions can be led astray by the opinions of others instead of trusting how they think and feel about the issue. Pisces can be abused and influenced so blindly. They rarely have a strong position, and having two Pisces around can bring confusion and uncertainty when it comes to major decisions and matters in the relationship.
Don'ts with a Pisces and Pisces Relationship
Although Pisces has a deep admiration for their fellow Pisces, their relationship is neither perfect nor faultless. They can be laid back and emotionally clingy. It is important that Pisces do not linger much on these aspects and instead create more positivity in each other.
Pisces are gentle lovers, calm, and tolerant, but their mood swings can overpower them. They can be sensitive about everything, even regarding the little things that they should actually just ignore. Pisces also has this tendency to mimic what their partner wants them to be. They can portray a perfect lover, one who completely understands and supports their partner, but the truth is they may secretly oppose them; which can make things worse in the end.
It is important that both parties must stay true to each other's feelings. They must learn to share and partake in one another's flaws and positivity. Secrecy will never work. They should not disregard the fact that they need to feel connected despite their differences and blemishes.
What The Relationship Needs
Pisces and Pisces in a relationship can be an exciting combination. Both are compassionate, honest, as well as emotionally and spiritually bonded. Both share both a love for peace as well as an unparalleled commitment for peace. Though this love match may not be the most perfect and ideal partnership, their sincerity to the commitment is enough to make it succeed.
This relationship needs respect and spontaneity. Both are easy going, flexible, and amiable. They must not fail to see their adversities in life and pass through it. They have a fun and exciting kind of relationship. They must maintain the commitment they have for each other, and continue to appreciate each other despite dissimilarities. Astrological Personality and Compatibility Reports
We use natal Personality Astrology Reports and Compatibility Reports to help souls better understand who they are, and how they can improve their present relationships. These tools work in conjuction with your Daily Horoscopes for Pisces.
These are very detailed reports, and are done by souls donating their time and energy to help you attain your Spiritual Growth.  You are invited to request one, but we do require you be an active member of our weekly newsletter.

Pisces Compatibility
Learn the best relationship matches for your sign and find out which ones will be the most challenging for your soul as a tool to help you evolve and improve your relationship through advanced communication skills.
Most Compatible
Most Challenging
1